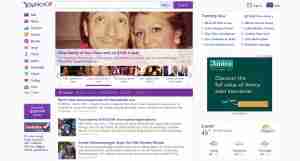 Yahoo is making changes. For the first time in four years, the website is re-designed and incorporates social media features such as newsfeed that are familiar to Facebook users.

New CEO Marissa Mayer is making a push to increase Yahoo’s page visits as well as revenue. In recent years, Yahoo has experienced a steady revenue decline because of the growth of competitors such as Facebook and Google. Some of Meyer’s plans to help boost Yahoo include a recent partnership with Facebook and an increased focus on mobile applications. It seems to be a step in the right direction. Yahoo attracted 392 million worldwide visitors last month, a 7 percent increase from the same time last year. Yahoo stock has also gained 36 percent since Meyer was named CEO in July.

In addition to the new web design, Yahoo has developed more sophisticated formulas to determine which topics are most likely to appeal to each individual. When a user is logged into Yahoo through Facebook, the newsfeed on the homepage will display tailored stories likely to appeal to that user. The newsfeed has been retooled so that it is constantly refreshed as a user scrolls down the page, for endless stories. The user can also program the feed to automatically show specific news, like stocks in their investment portfolio or certain sports teams.

The new Yahoo web design has already been optimized for smart phone and tablet use. Meyer previously stated that her top priority for Yahoo is mobile devices. A redo of the Yahoo Internet Shop Window featuring a new mobile app is also reportedly in the works. In an interview with the Today Show, Meyer elaborated on the recent changes stating that, “We wanted it to be familiar but also wanted it to embrace some of the modern paradigms of the Web.”