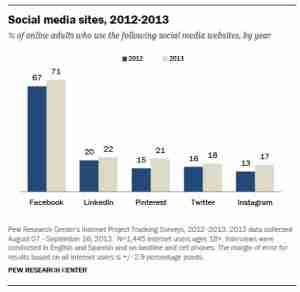 Pinterest’s popularity has grown more than Twitter and LinkedIn combined over the last year, according to a Dec. 2013 study by Pew Research Center.

The study provided digital advertisers with a wealth of information on where their target audience is currently and where it might be headed in 2014.

Demographics in the Study

It’s no secret that Pinterest appeals to female users. Women are more likely to use Pinterest than men attaching no barriers other than the 18 or older facet used in the survey. LinkedIn, on the other hand, is popular among college graduates and internet users with higher incomes, the study revealed. Twitter and Instagram resonate with urbanites, younger adults and non-whites. Facebook holds 70% usage from whites, Hispanics and African Americans.

As with individual users, businesses create an account, then use the site to pin images and videos to its  online boards, which organize content into collections based upon interest. Existing and potential customers are then able to follow boards, which put the business’ pins in a feed from which they can repin, like and comment.

Pinterest has only just begun to implement advertising. In October 2013, Pinterest began testing the promoted pin. These promoted posts work like regular pins with a promoted icon in the right hand corner, keeping the ads tasteful, transparent and relevant to its users.

Which social network do you feel is most useful to businesses?

Bigfin.com LLC can create custom solutions for the social media needs of your business,  including the creation and management of Pinterest accounts. Bigfin is an industry leader in search engine optimization, web design and social media. Looking for online marketing or web development services? Contact us online or by phone at 425-822-8200.